(Continued from Part 1.) Tasmania’s Central Plateau is the stronghold of pencil pines and has seen frequent, localized, low severity fires since before the British occupied the country. Fires lit by graziers have burnt much of the Plateau (particularly in 1960-61 which was the driest spring-summer in the 80 years prior to 2015-16), resulting in the loss of around one-third of the extent and 10% of the population of pencil pine. King Billy pine (Athrotaxis selaginoides) forest on the West Coast Range and elsewhere was similarly impacted by anthropogenic fires from the 1880s into the early 1900s. 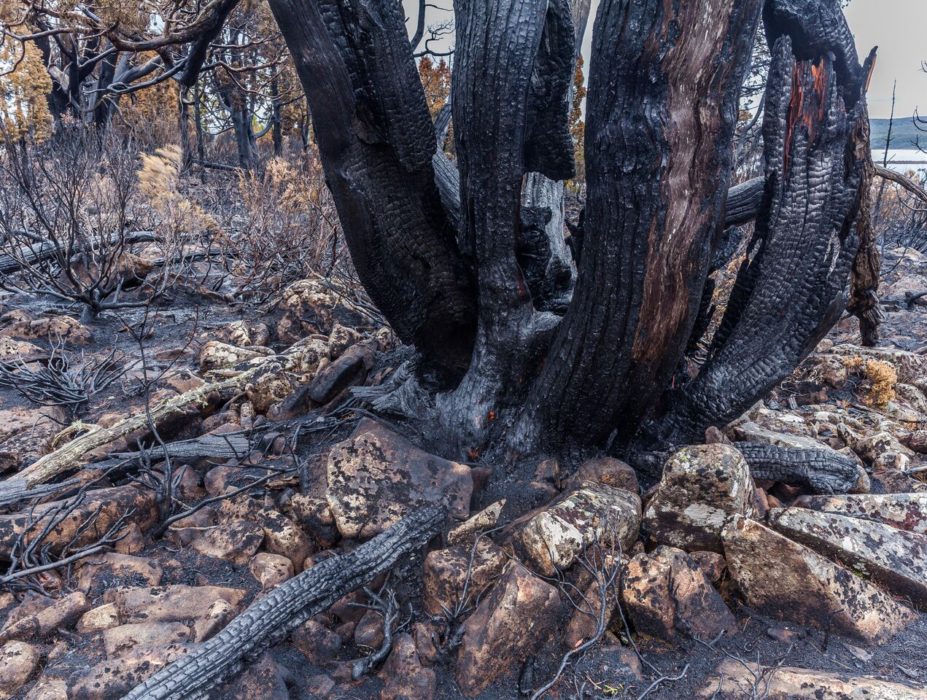 In the end, around 15,000 hectares – less than 2% – of the TWWHA was burnt in the 2016 summer and only a small proportion of this burnt area was fire sensitive vegetation. Probably less than 35 hectares of pencil pine was destroyed (Jon Marsden-Smedley, pers. comm.). The danger is that incremental losses like these will compound over the coming decades or, worse, conditions like the past summer coincide with severe fire weather with catastrophic outcomes.

Active interventions, such as replanting or ex situ conservation, may need to be employed. Tasmanian Government scientists are assessing the damage to the alpine ecosystems near Lake Mackenzie. The fires burnt some long-term conifer monitoring sites, established five years earlier to observe the health and demographics of pencil pines. These sites now present an opportunity to observe damage and recovery in these alpine ecosystems. 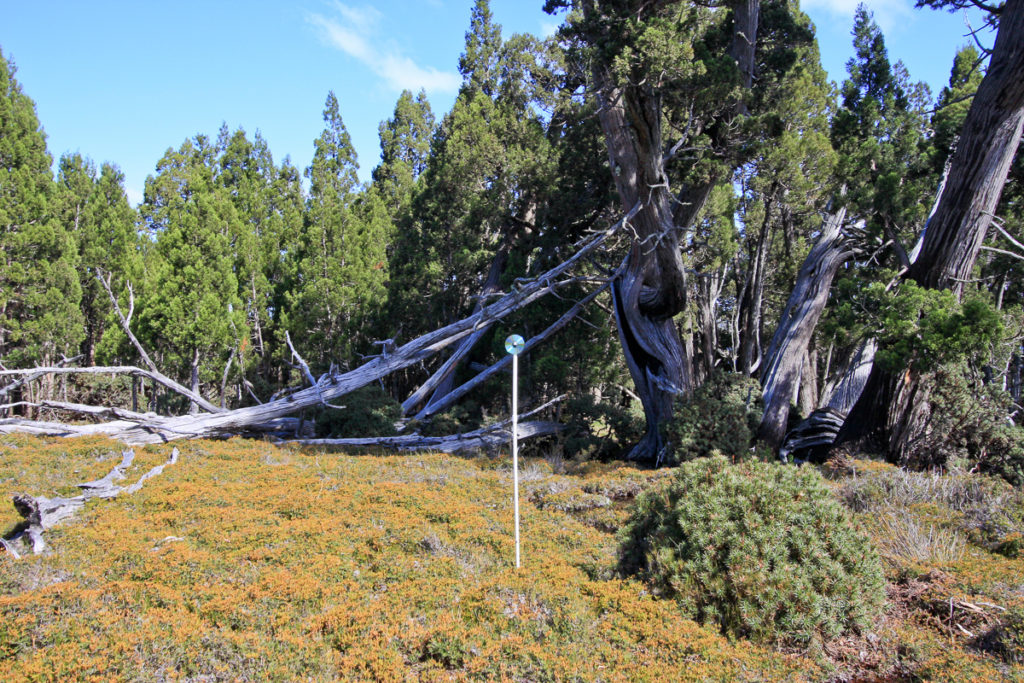 The Lake Mackenzie fire burned the headwaters of part of the Mole Creek karst catchment. Where peat soils (organic soils) have burned, the land surface cannot act like a sponge as it once did. Previously, this sponge acted as a buffer to release water gradually. Now, the effects of rainfall events are seen quickly in the caves below the Western Tiers. These “flashier” hydrological phenomena could mean poor karst conservation outcomes: increasing effects of climate change, longer dry spells and more severe floods stress the karst ecosystems and the very substrates cave animals live upon.

Extensive fires in the Tarkine region burned mostly scrub and moorland with some wet eucalypt forest and rainforest. The ‘Maxwell River Fire’ in remote southwest Tasmania burned mostly buttongrass moorland and scrub. The Tasmanian Parks & Wildlife Service monitored this fire and the weather conditions in readiness to act if fire-sensitive vegetation became at risk,  as happened in 2013 when a lightning fire burned 45,000 hectares near the Giblin River in southwest Tasmania, burning riparian Huon pine forest and reaching the edge of the alpine zone in the Western Arthur Range. 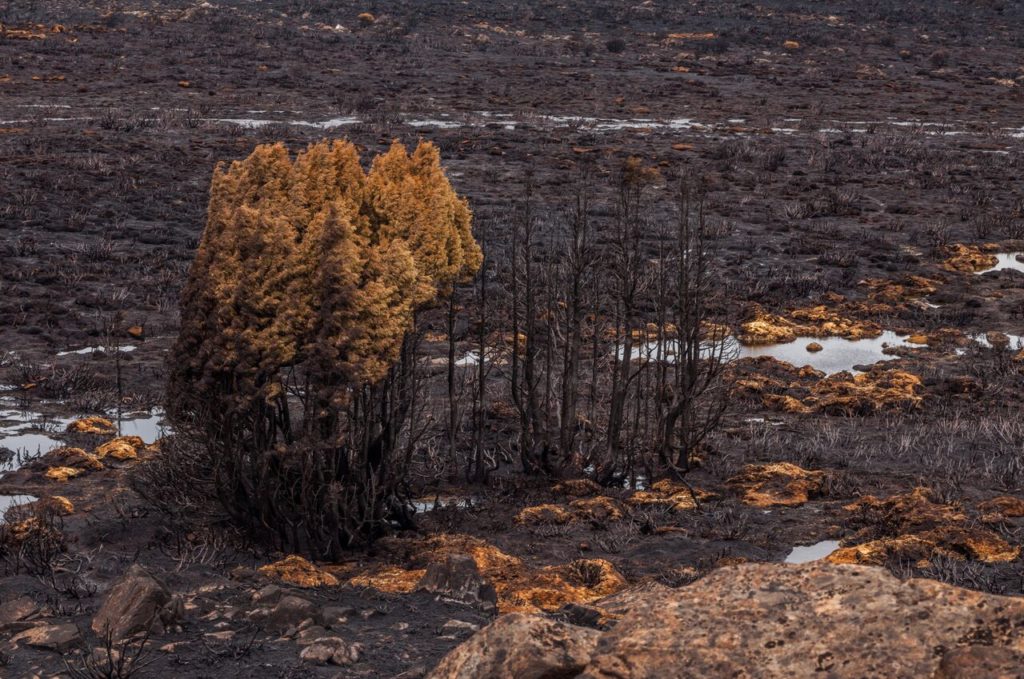 The Parks and Wildlife Service utilises a Bushfire Risk Assessment Model and expert advice to monitor and predict threats to natural values, in line with their management goal: “No loss of fire-sensitive vegetation or other high conservation values in the TWWHA”. However, there may be limitations to achieving the goal on the ground, due to severe conditions, remote locations and limited firefighting resources.

It is difficult to ascribe climate change as a direct cause for any single event. It may seem strange to consider lightning fires as anthropogenic, but that is the logical conclusion from the facts of climate change. Large bushfires were very infrequent prior to European invasion and subsequently increased due to intentional and indiscriminate burning of the bush and changed land management. In the modern era, with restrictions on use of fire in the bush, improved understanding of bushfire science, better fire suppression capability and fire surveillance technology (including satellite images), we might expect to see less destruction caused by bushfires. However, these advances may not be enough to compensate for the increasing wildfire frequency and severity we are beginning to see in this changing climate.

This article was originally written for the Central North Field Naturalists and is based on a presentation given at the Gondwana on Fire public forum in Launceston organised by The Wilderness Society in March 2016.

Thanks to Deb Hunter for information on the hydrology and karst impacts.

Further reading:
Nature Scribe: A Tasmanian Catastrophe
The Conversation: Fires in Tasmania’s ancient forests are a warning for us all
The Monthly: Rupture in Tasmania
Pep Talk Ecology: The majestic Pencil Pine: pushed to the brink