The treeline at the southern tip of South America, in Tierra del Fuego, reaches up to 600 m.a.s.l.  At the same latitude, Macquarie Island has no trees or shrubs. Is the lack of trees in the Subantarctic islands simply due to lack of dispersal? Tierra del Fuego’s climate is more continental with colder winters and warmer summers than Macquarie Island. Consequently Ushuaia’s January mean maximum temperature is 9.6°C while Macquarie Island’s is around 7°C, well below the 10°C warmest month biogeographic rule for tree growth. Climatic data suggest Ushuaia, at sea level, is marginal for tree growth, yet the city is surrounded by lush forest extending up to 600 m elevation where the mean January temperature is estimated at 6°C or less. Slightly further south in Tierra del Fuego the treeline becomes lower until it reaches sea level, at the southern limit of tree growth at 55°S. 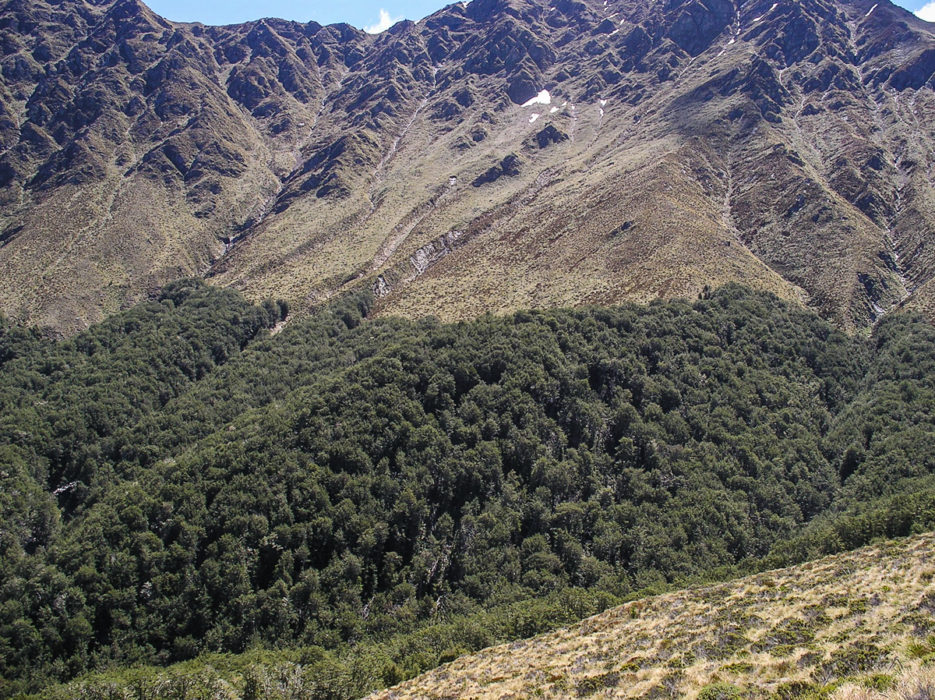 Research suggests treelines in New Zealand (mostly Nothofagus-dominated) occur at significantly higher temperatures (lower elevations) than Northern Hemisphere or Andean alpine treelines. Explanations include the more oceanic climates of southern landmasses, a lack of extremely cold-tolerant trees or the critical importance of minimum temperatures rather than summer warmth. However these explanations don’t hold up. A diverse range of tree species form treelines in the southern continents and they have existed for millions of years – plenty of time to develop greater cold tolerance.

One of the limitations of many treeline studies is a lack of site-specific temperature data, instead relying on extrapolations from distant meteorological stations. Recent research in New Zealand measured soil and air temperature at treeline sites and reassessed previous studies, concluding that the 10°C rule holds for New Zealand and Patagonia. Summer temperatures in the Southern Hemisphere are not as warm as for equivalent northern latitudes which explains the lower elevation of the southern treelines, but it does mean the thermal limits of montane trees are similar globally. Furthermore, the growing season is longer (up to 9 months in western New Zealand) and therefore the mean temperature over the entire growing season (defined as the period in which soil temperature exceeds 3.2°C) is comparable between hemispheres. 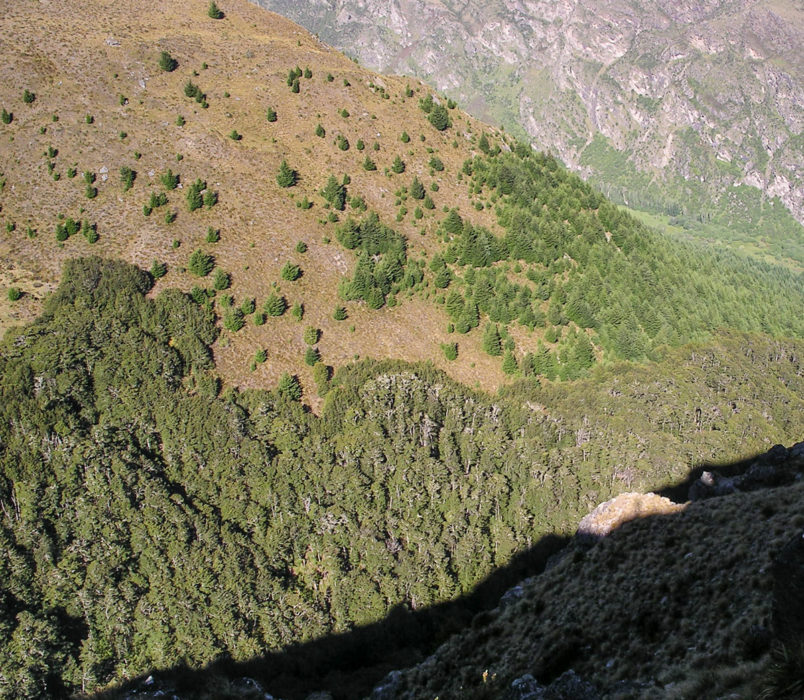 The growth of invasive Northern Hemisphere trees such as Pinus contorta up to 150 m above the native Nothofagus treeline in New Zealand has been taken as evidence that native trees are less cold-tolerant, but in this case an abrupt natural treeline suggests other stress or ecological factors may be involved in determining the native forest/alpine grassland boundary.

In Tasmania, the climatic treeline varies in elevation from around 800 metres in the southwest to over 1400 m in the northeast, generally increasing in elevation with distance from the sea due to continentality and towards the north with the effect of latitude. However, treeless vegetation can occur below the climatic treeline due to other factors such as frost or waterlogging, resulting in a mosaic of forest and other vegetation types on the Tasmanian Central Plateau rather than a distinct altitudinal zonation in vegetation.

Treelines are not necessarily controlled by temperature. The alpine treeline of Tasmanian snow gum (Eucalyptus coccifera) on Mt Wellington in south-east Tasmania is controlled by water stress due to shallow soils and desiccating winds in some situations. Similarly, mainland Australian eucalypt treelines may be influenced by summer drought. While air temperature may control the ultimate physiological limit on tree growth, the stability of treelines over time, even in a warming climate, can be attributed to additional factors such as lack of seed dispersal or seedling regeneration niches above the treeline.

The southernmost treeline in the southwest Pacific is formed by inaka (Dracophyllum longifolium) on Campbell Island. The climate of Campbell Island, at 52°30’S, is clearly marginal for trees. While inaka reaches 5 metres tall in sheltered locations, meeting the 3 m height criterion for the treeline, it is perhaps best described as elfin forest or dwarf forest. A lone sitka spruce (Picea sitchensis) planted in 1907 on Campbell Island is little taller. More unequivocal forest occurs a little further north on the Auckland Islands, where Southern rātā (Metrosideros umbellata) is the dominant tree, along with Dracophyllum. 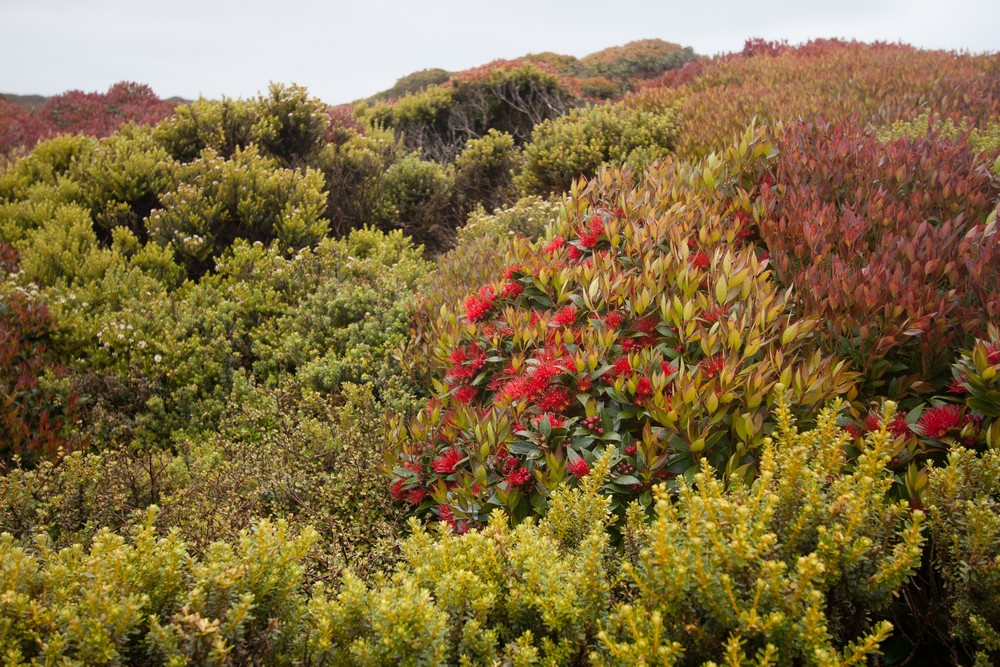 The Subantarctic islands – too cold for trees?

Some authors define the Subantarctic based on botanical criteria, specifically the lack of arborescent vegetation. This conveniently answers the question about lack of trees in the Subantarctic, but it doesn’t explain why this ecoregion is treeless. Is it simply too cold for tree growth even in the most sheltered sites? The variation in treeline elevation on Campbell Island with wind exposure demonstrates the importance of wind as a limiting factor in addition to temperature. The strong winds of the Subantarctic likely contribute to the adverse conditions for tree growth.

Macquarie Island maintains a mean daily temperature of 6-7°C at sea level for around 3 months during summer, which is typical of treeline growing season temperatures elsewhere but the growing season is probably too short to support trees. A 14 month dataset from the eastern side of Macquarie Island found 10 cm depth soil temperature remained above 3.2°C for around 6 months, with summer (Dec-Feb) means of 7-8°C during 1996/7 at both 10 m.a.s.l. and 200 m.a.s.l. These temperatures suggest the possibility of tree growth on sheltered sites, though long term data are needed since annual variation can be considerable.

At the same latitude but with a wider temperature range, South Georgia has a theoretical growing season for trees of 5 months, yet is lacking in woody plants. At slightly lower latitude, the treeless Kerguelen Islands have 8 months of monthly mean temperatures above 6°C.

Climate change and the expansion of woody plants

The very limited tree growth on Campbell Island, where summer mean temperatures are 3-3.5°C warmer than Macquarie Island, and above 6°C year round, suggests that Macquarie Island is too far south for tree survival. Evidently, even sheltered coastal habitats on Subantarctic islands are slightly beyond the limits of tree growth. This raises another question: why are there no woody plants? Woody shrubs exist somewhat beyond the treeline, forming a key feature of the Arctic tundra and some alpine vegetation. It seems the Subantarctic growing season is too short to support any woody plants. 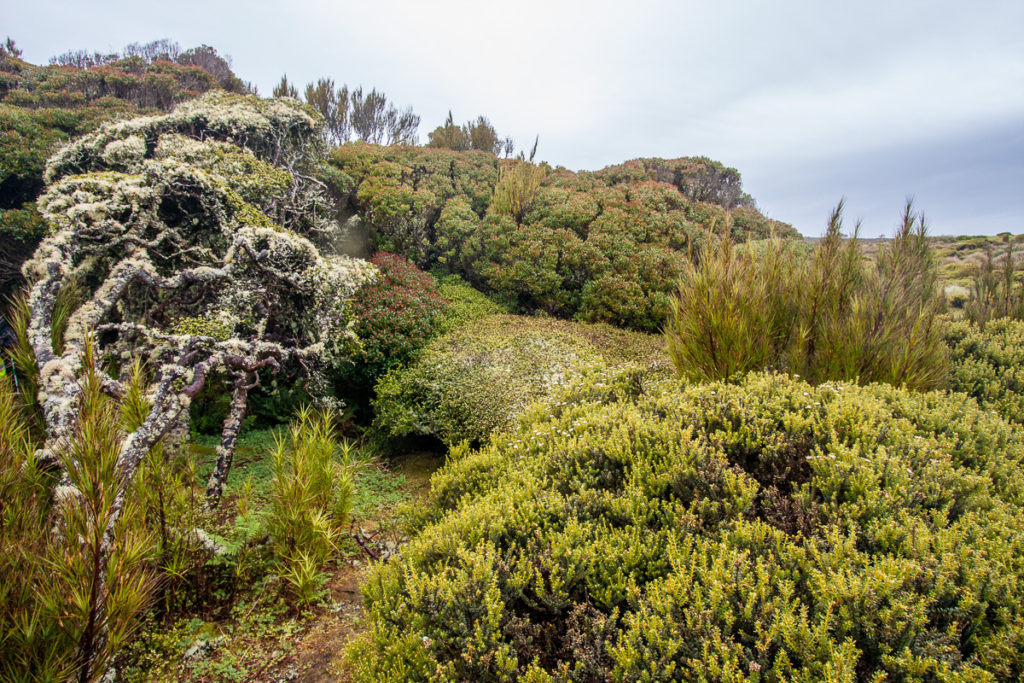 If this is the case, an increase of 3°C in mean air temperature in the Subantarctic – a not unrealistic scenario in the next century – might shift the climatic treeline south of islands like Macquarie. Then only successful seed dispersal of suitable species will determine whether hardy shrubs or even elfin forest become a new addition to the Subantarctic.