In February 2017 I visited the charred landscape around Lake Mackenzie on Tasmania’s Central Plateau. Having seen many photographs of the devastation in the months after the bushfires of January 2016 I was curious to see the damage – and early signs of recovery – first hand.

Tasmanian Government biologists have established an ecological monitoring program [pdf] to document the post-fire vegetation and fauna over the coming years. In the meantime here are some initial observations of fire impacts and vegetation recovery in the several affected subalpine and alpine ecosystems. 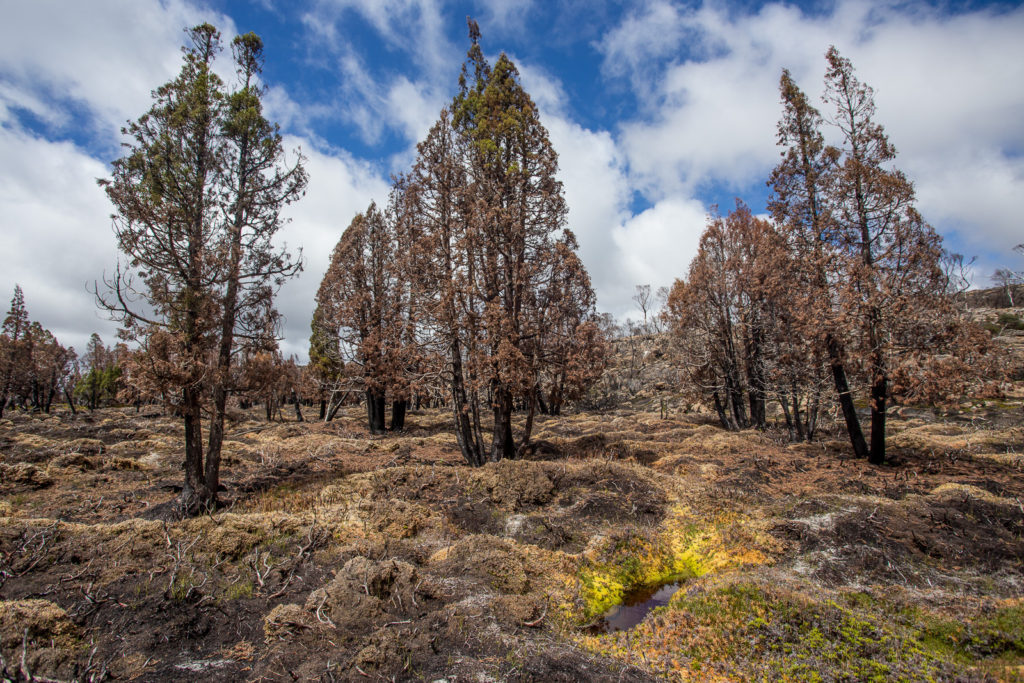 Burnt Sphagnum bog and pencil pine trees with some surviving foliage near Lake Mackenzie, one year after the January 2016 bushfire. These trees are unlikely to survive given the extensive fire damage. 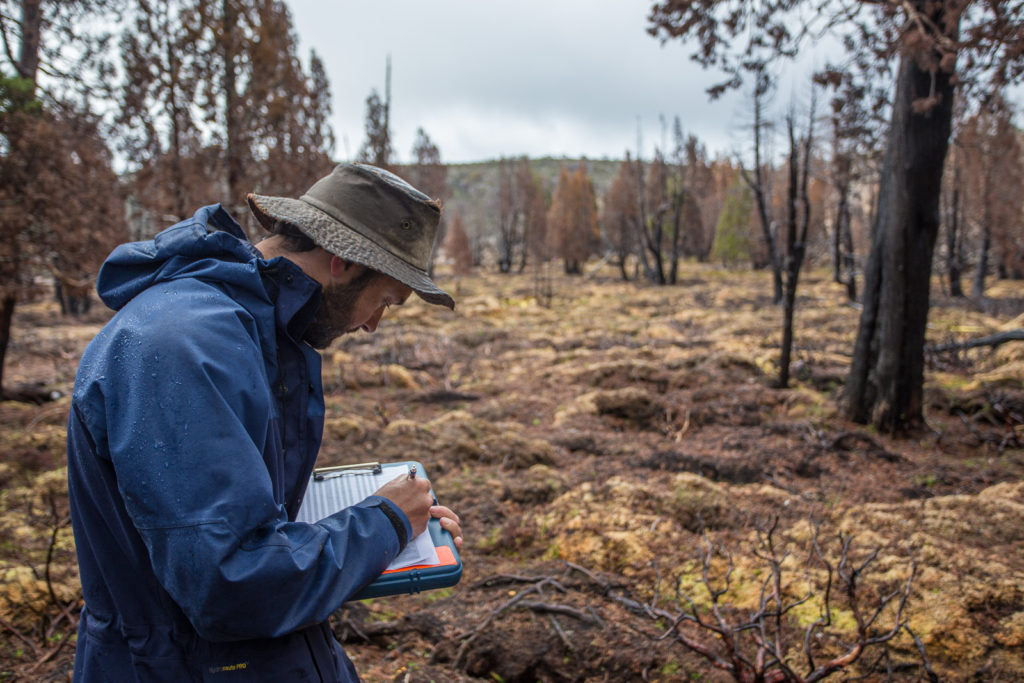 Monitoring damage and recovery in the pencil pine – Sphagnum ecosystem.

Fire damage to pencil pine-dominated vegetation has caused the most concern on account of the fire-sensitivity of Tasmania’s native conifers and their vulnerability to local extinction due to poor recruitment, limited seed dispersal and slow establishment. Certainly the early reports and photographs (from the air and on the ground) painted a grim picture of blackened stands of trees, starkly displaying the mortality of one of the longest-lived organisms on Earth. However, even in some of the worst affected patches of pencil pine there are often some trees retaining green foliage on the upper branches.

Damage to pencil pine (Athrotaxis cupressoides) trees seems to be related to the flammability of the understorey: only the lower branches tend to be burnt with a Sphagnum moss bog or sedgey/grassy understorey whereas the presence of scoparia (Richea scoparia) bushes evidently generates a hotter fire which carries higher into the pencil pine canopy and also burns the surrounding Sphagnum mounds. Pencil pines growing beside or leaning over pools of water were the least burnt, some large survivors even had fire scars on the trunk from previous fires. 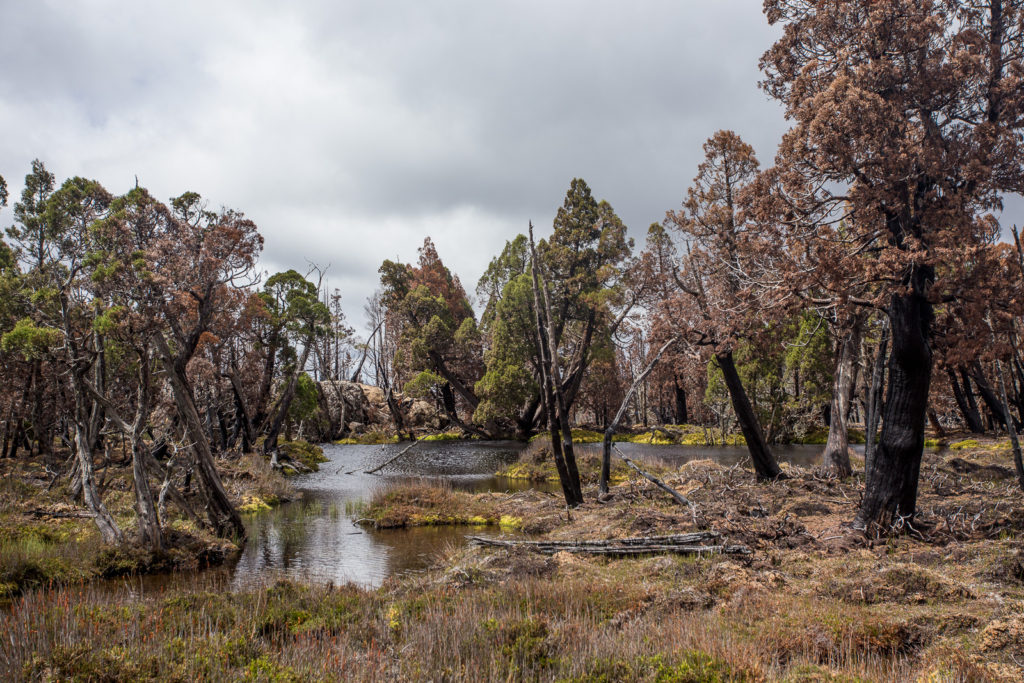 Pencil pine trees growing next to water were less impacted by the bushfire while trees only metres away were killed.

In pencil pine trees which had most of their foliage killed by fire the remaining foliage has since died or is dying, while those trees in which most of the foliage had survived the fire appeared to have suffered no more foliage death over the subsequent months. In rare cases new growth is evident on partially burned trees.

A few young pencil pine seedlings have germinated in the moist bed of sphagnum moss, but their chances of reaching maturity are slim in the face of drought, future fires and browsing mammals. Replacement of the numerous dead mature pencil pine trees will take many hundreds of years. 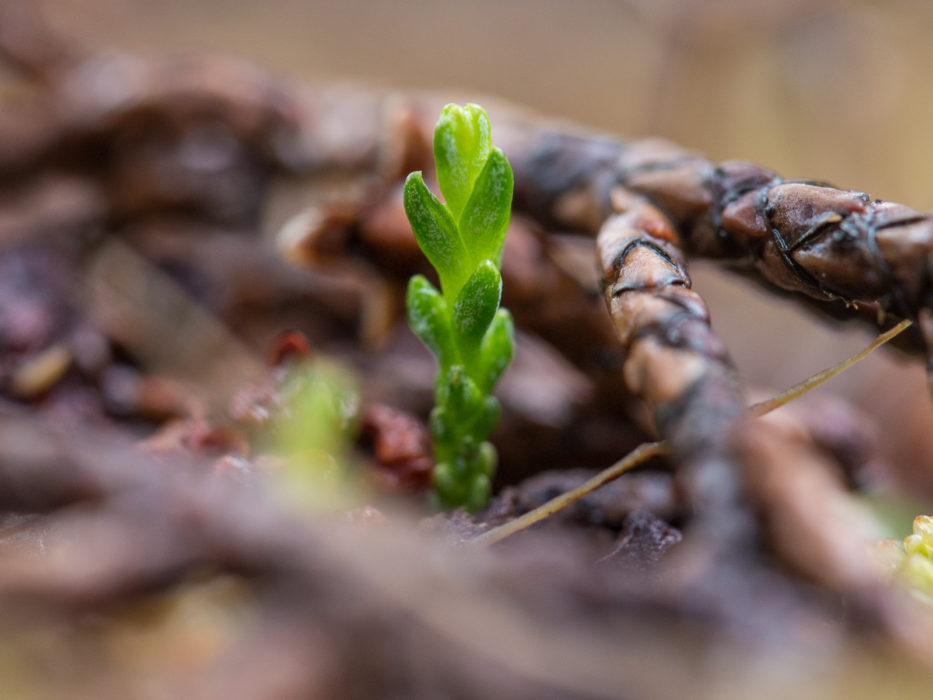 A recently germinated seedling of pencil pine growing in a fire-killed Sphagnum mound. 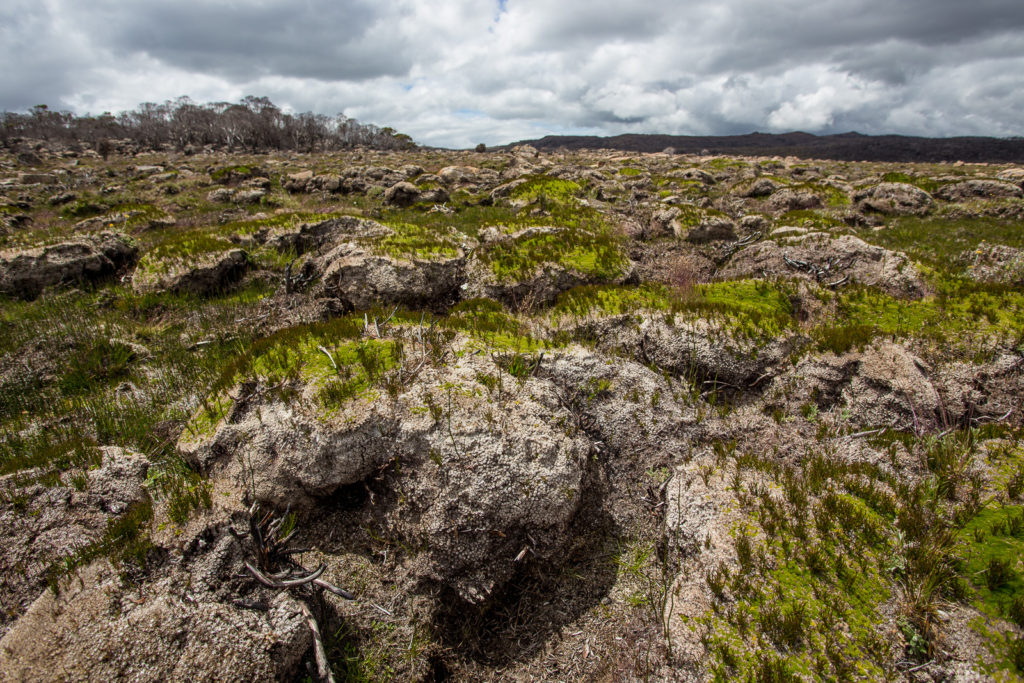 Cushion plants (Abrotanella forsteroides) suffered extensive fire damage but the central part of most cushions retains some live foliage. The rush Empodisma minus is rapidly invading these damaged cushions.

Alpine heath is showing signs of regrowth, with many of the shrub species resprouting from the base of their stems after losing all their foliage in the fire. The dominant shrub, narrow-leaf orites (Orites revolutus), has vigorous new growth, as does myrtle beech (Nothofagus cunninghamii), mountain pepper (Tasmannia lanceolata) and waratah (Telopea truncata). Herbs, such as everlasting daisies, have grown from seed, taking advantage of the lack of competition from the formerly dense shrubs. It will be many years before the shrubs reach their former size. 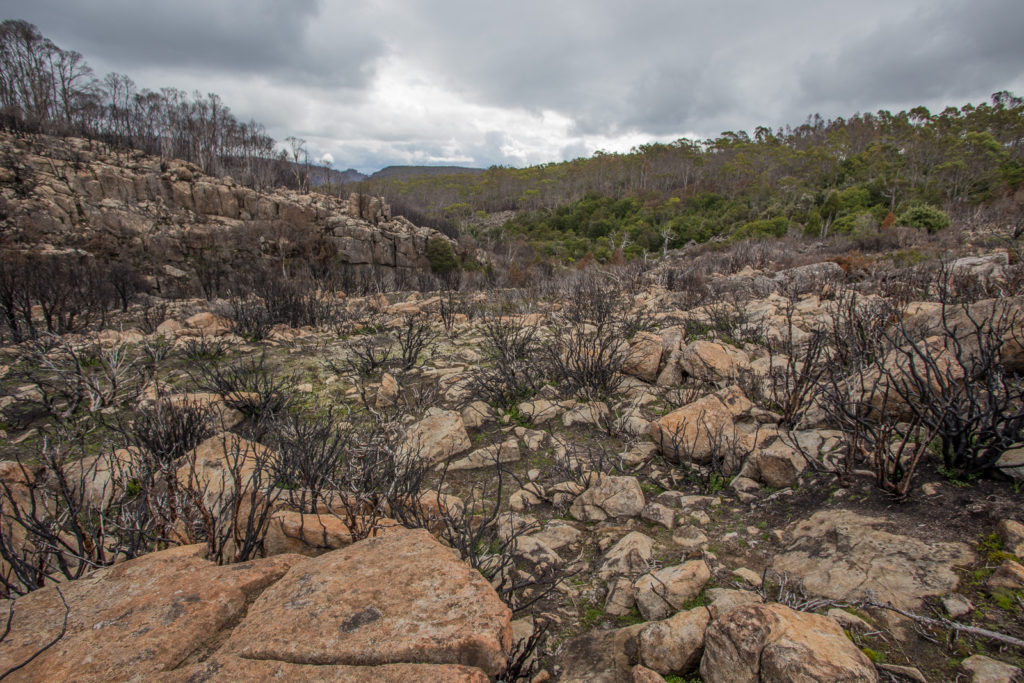 Burnt alpine heathland in the headwaters of the Fisher River, with unburnt rainforest and eucalypt forest in the background. 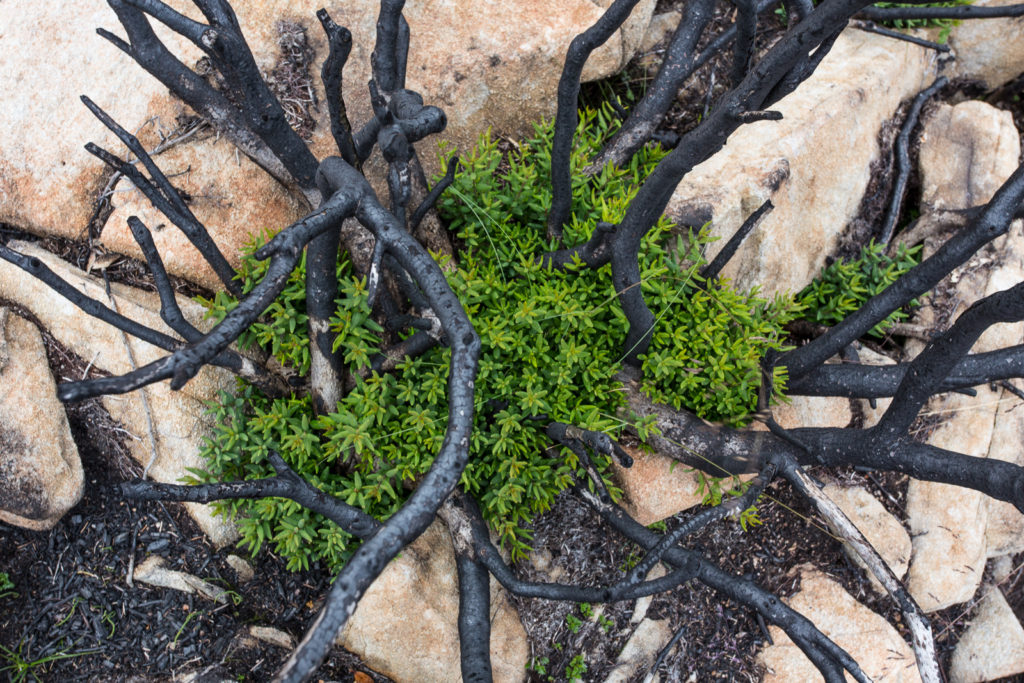 Similarly, the eucalypt trees (Eucalyptus gunnii, E. coccifera, E. archeri) in the subalpine woodland are frequently resprouting from epicormic buds or lignotubers. However in places the eucalypts seem to have been killed outright, probably due to very intense heat, and the shrubby tea tree understorey shows no signs of regrowth. Unlike the alpine heathland and grassland there is a surprising lack of colonising herbs in the burnt eucalypt forest; perhaps their establishment is delayed due to a lack of local seed sources. 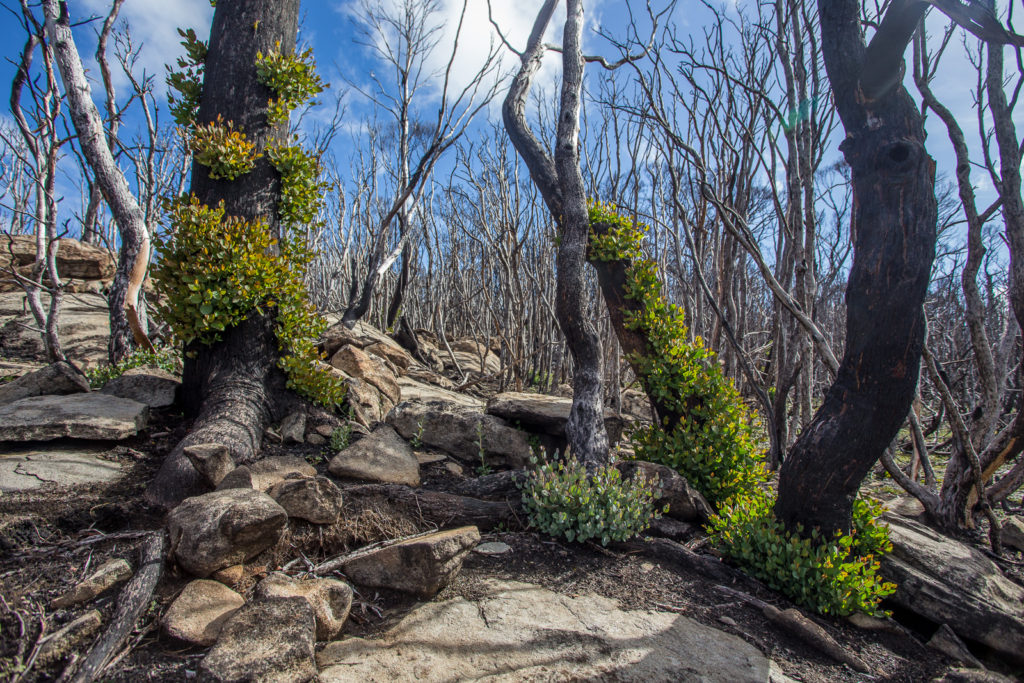 Subalpine eucalypt trees regrowing from both epicormic buds and lignotubers.

Subalpine grassland is the most fire-tolerant of the highland ecosystems. The resilience of this community is evident in the many grasses, sedges and herbs resprouting from their roots or germinating from seed. However, the heavy rains which hit the Lake Mackenzie area in the winter following the summer bushfires have caused erosion of the bare soil in places. 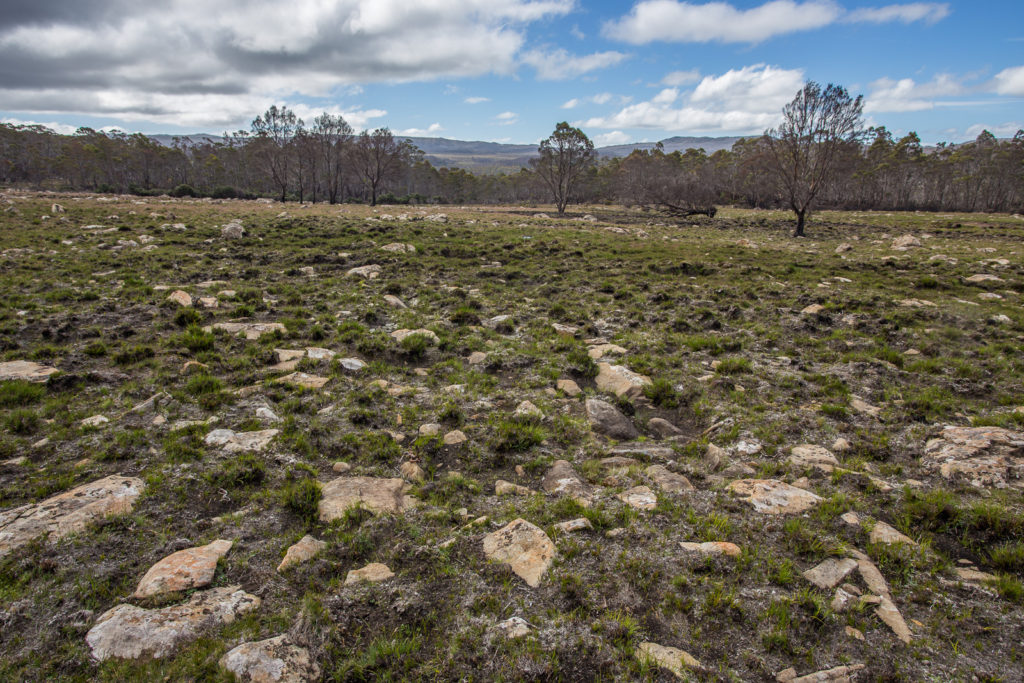