Four years have passed since I first visited Macquarie Island and now the subantarctic island looks like a different place. The distinctive tussock grass is dotted across the coastal slopes in a scene reminiscent of the 1980s and 1990s when low rabbit numbers due to the myxoma virus allowed the tasty giant grass to proliferate. But it won’t stop there: with no grazing animals at all now the tussock will likely completely take over the lower coastal slopes and will continue to march up the slopes – vanguard seedlings are already present high on the mountains. Macquarie Island now looks like it did 20-30 years ago. By 2030 it might go back in time more than 150 years to something much like the wild undiscovered island dominated by megaherbs in the absence of grazing animals. 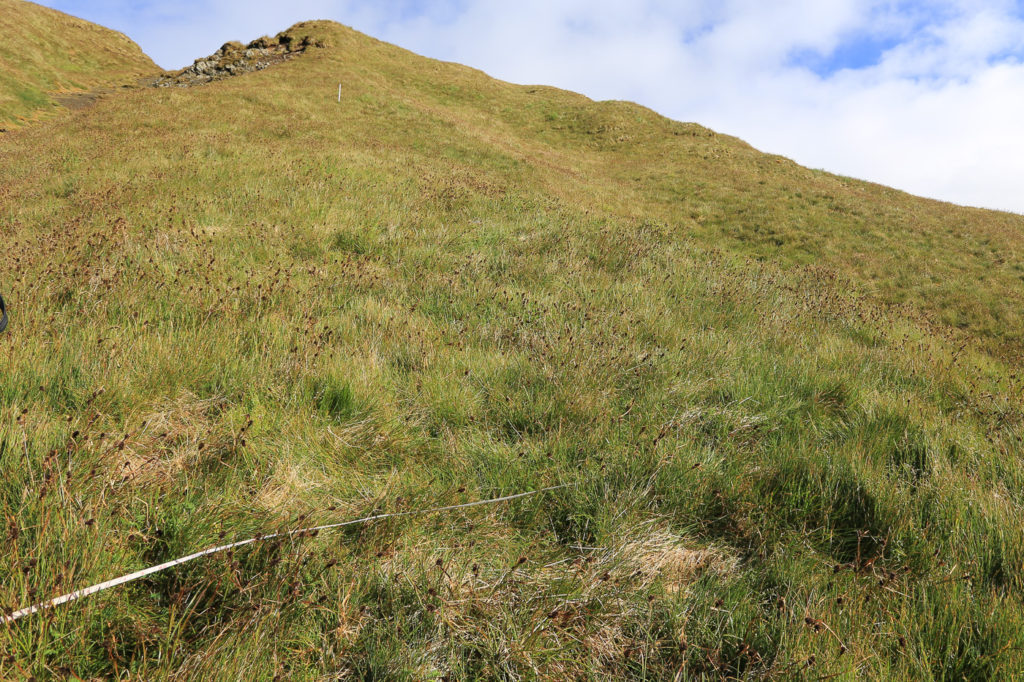 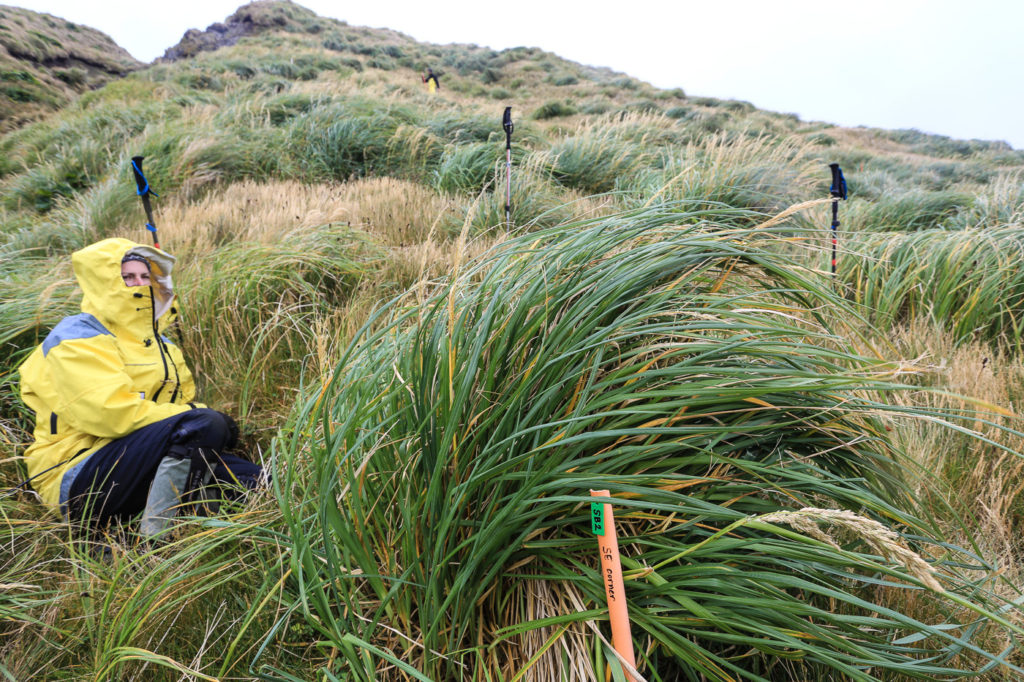 The most obvious change is the increased abundance of tussock grass, at least at lower elevations. The other megaherbs, Stilbocarpa and Pleurophyllum, are slower to respond. Stilbocarpa is venturing away from the coastal cliff refuges where it survived during the rabbit ravaged early 2000s. Seedlings smaller than a dinner plate were apparent in the grasslands four years ago – they are now mature flowering plants with dinner-plate sized leaves. In time these knee-high plants might grow as tall as a person. 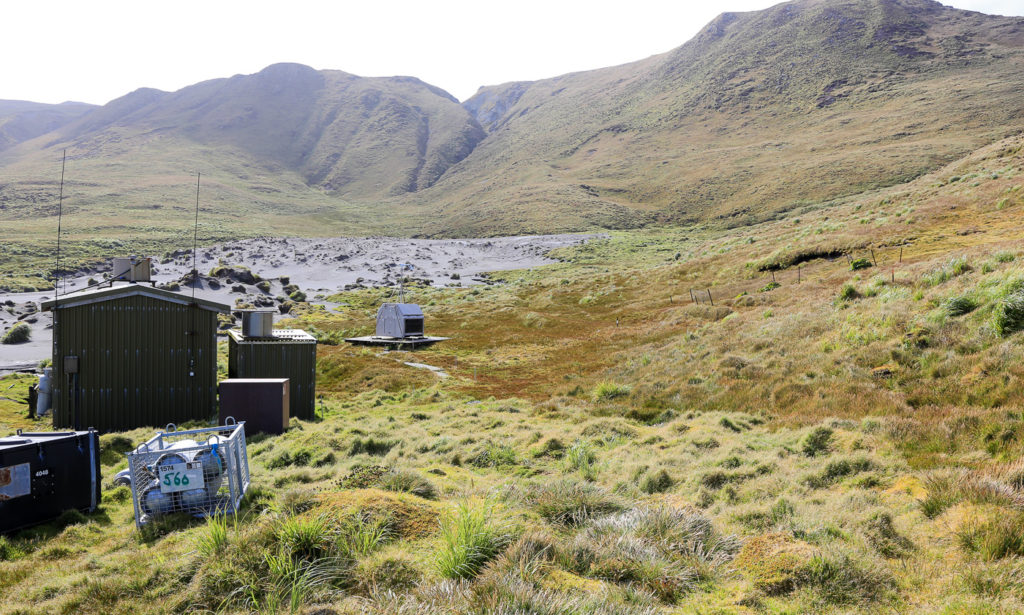 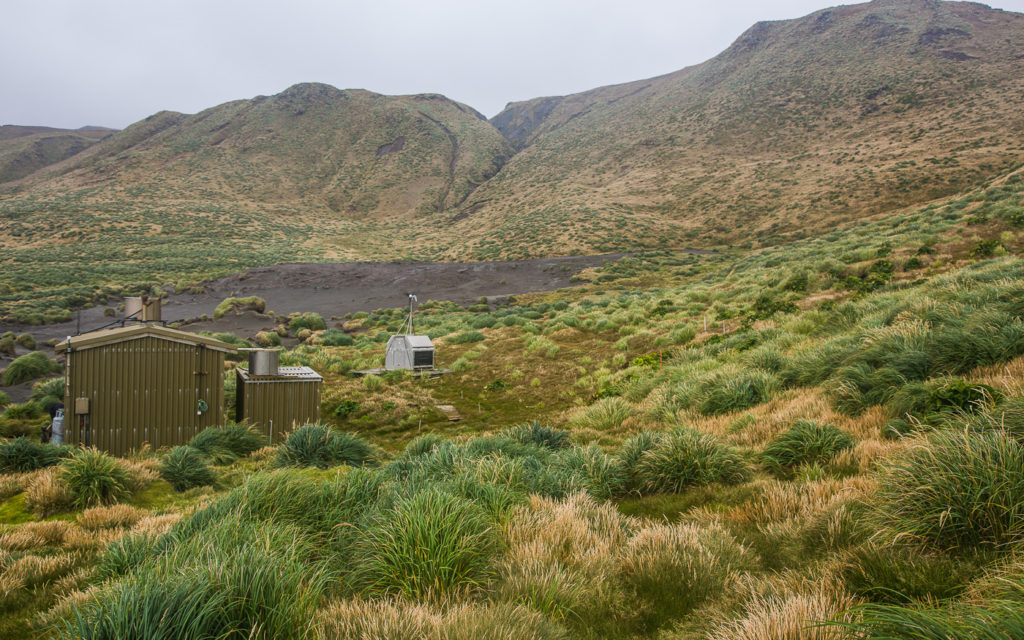 Bauer Bay, March 2017. Tussock grass has re-established around the hut, on the eroded black sand dunes and on the escarpment. 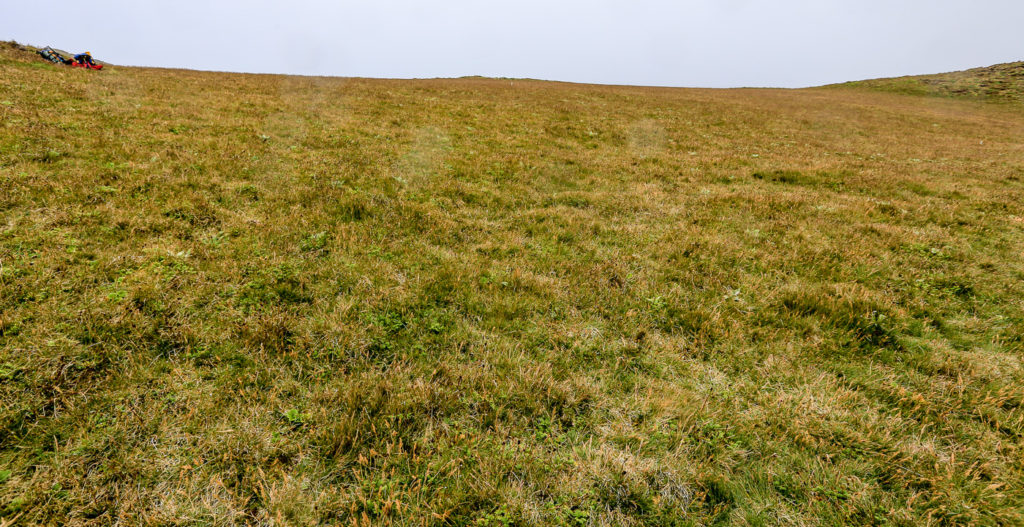 At mid elevations the changes are slower and also harder to predict. Megaherbs are appearing in the windswept short grasslands but will they eventually grow as abundantly as they do near the coast, or will they stay stunted and coexist with an assemblage of smaller grasses, rushes and sedges? Extensive areas dominated by the large fern Polystichum which previously occurred on sheltered slopes and creek gullies were decimated by rabbits. Like the megaherbs, young Polystichum plants are appearing in places they haven’t grown for years.

At the highest elevations things typically change slowly and rabbits had little impact on the sparse feldmark vegetation, so the ecosystem at the start of this century was probably little different from when the island was discovered in 1810. However, in the past few years a dramatic dieback has damaged and killed a significant proportion of the endemic Macquarie Island cushion plant which is a key component of the feldmark vegetation. Dead cushion plants provide a good place for other plants to grow in an environment with very little soil, so one outcome of this relatively rapid decline of a keystone species may be grasses becoming more abundant in the feldmark. 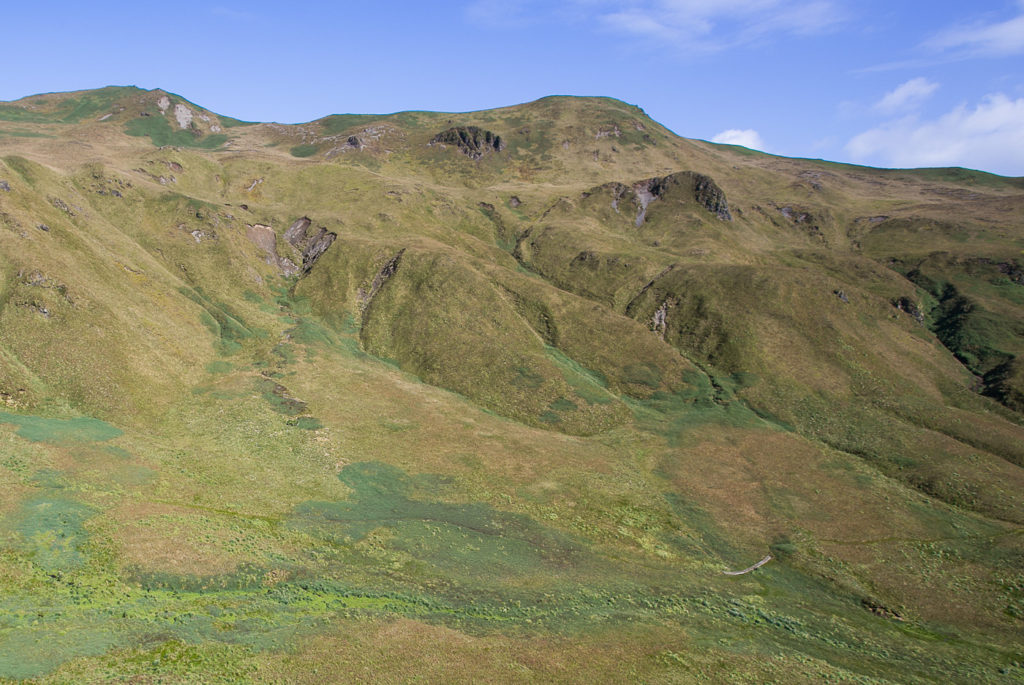 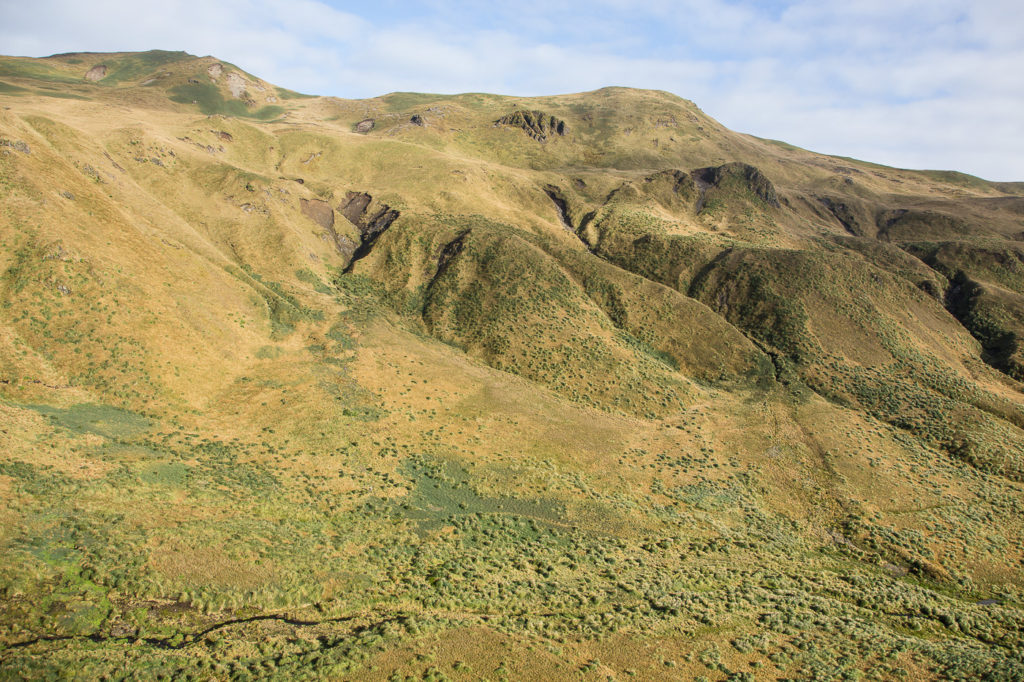 Same scene, March 2017. Widespread tussock grass in valley and on lower slopes. In another few years this valley may be entirely dominated by tussock grass.

While changes in the abundance of megaherbs are obvious in time series photographs of the landscape, smaller plants go unnoticed. Long-term vegetation monitoring sites established in 1980 reveal some of these more subtle changes. These sites have been revisited three times since rabbits were eradicated in 2011. In the short grassland vegetation the grasses have grown taller and a dense ground layer of moss has developed in many places underneath the grass, while bare ground caused by overgrazing or rabbit digging has revegetated. Consequently the small native herbs which previously grew abundantly beneath the heavily grazed grass and on disturbed ground such as abandoned rabbit warrens have declined, though they persist in smaller numbers amongst the dense grass and in abundance along streambanks. 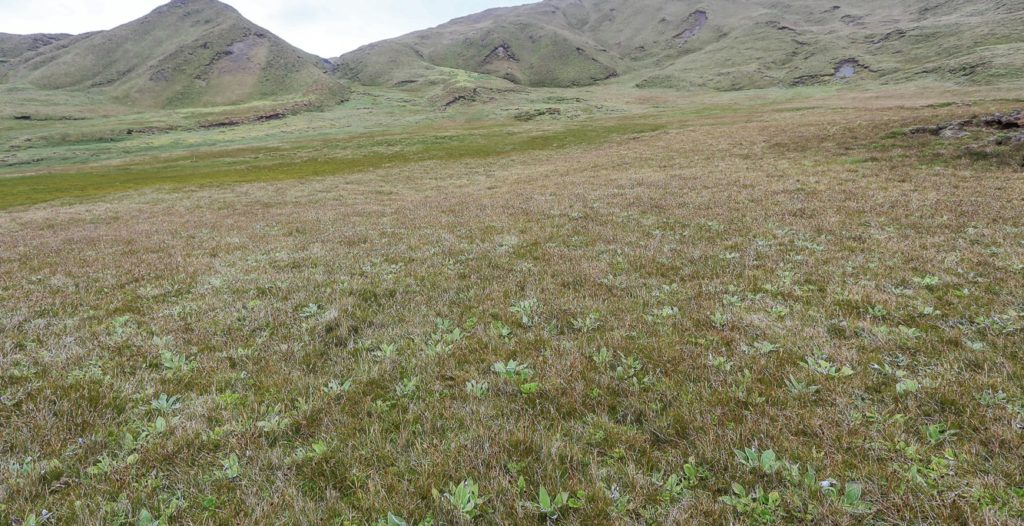 Gentoo Flats, March 2017. Pleurophyllum rosettes have increased in size (leaves are dying back at the end of summer). Small Stilbocarpa plants have appeared, signalling a future transition to tall megaherb vegetation. Note the tussock grass colonising slopes in the background and also a landslide which occurred in 2014.