UPDATE 19 SEPT 2016: Following a backlash from the public and scientific community the Australian Government is reconsidering the plan to close Macquarie Island station (see the backflipping ministerial announcement). We shall have to wait and see what the plan is for ongoing operations and responsibilities.

The Australian Government announced this week that the Australian Antarctic Division’s (AAD) Macquarie Island station will be decommissioned in March 2017 and subsequently demolished and rehabilitated over ten years. While the idea that a permanent presence on the island may not be necessary indefinitely has been discussed for some time, the announcement did come as a surprise given the nearly 70 years of continuous occupation and research on the island. 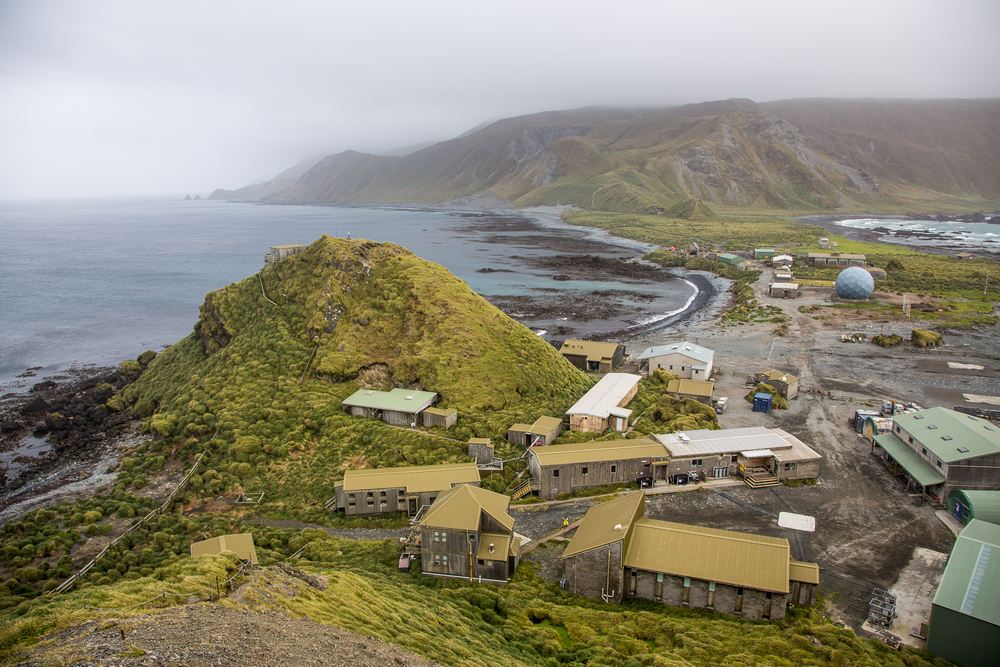 Macquarie Island station, established in 1948, sits on an isthmus at the northern end of the island.

What this decision means for research programs is still unclear. The six field huts on the island will be retained, providing for summer research voyages. Many researchers spend six or twelve months on the island under the long-established model of operations. It seems unlikely that six month deployments will occur since that is a long time to live out of field huts with limited facilities. Much of the biological research, such as vegetation monitoring and seabird surveys, lends itself to short field trips which presumably the new model will cater to. However, various bird species breed at different times so some of these long-term fauna monitoring programs will likely be impacted.

Aside from studying Subantarctic and Southern Ocean ecosystems, Macquarie Island is very important for meteorological observations. There are very few weather stations in the Southern Ocean and so the observations from Macca are important for forecasting weather in southern Australia and the long-term climate data (continuous records since 1948) is an significant contribution to global circulation models used for long-range forecasts and climate change predictions. While many of the weather observations can be automated, the daily weather balloons, which provide upper atmosphere observations including ozone concentrations, are manually released. 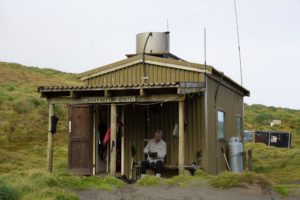 Six field huts, each accommodating 3-6 people, are located around the island.

There is a concern that not having a permanent presence on Macquarie Island will reduce the ability to prevent or detect invasive species incursions, such as rats, mice and weeds. Having eradicated rodents nearly five years ago it would be a disaster if they were accidentally reintroduced. On the other hand, having fewer people and less freight delivered to the island should reduce the risk of alien introductions. Any transfer of people or cargo from ship to shore presents some risk. Tourists briefly visit specified locations on the island from cruise ships, with Tasmanian park rangers overseeing strict quarantine and access protocols.

The rationale for the station closure includes the cost of upgrading aging infrastructure and the environmental risks of fuel spills and site contamination. However many of the station buildings are relatively modern and could be retained while the older infrastructure is removed. Pumping, storing and using massive quantities of diesel for power generation is a real risk to the environment and there have been fuel spills on Macquarie Island and at other Australian Antarctic bases. Sea level rise poses a real risk in the long-term since the station is very close to sea level (waves cross the isthmus between the two main complexes of buildings during big seas) and there are no practical alternative locations for infrastructure on this scale. 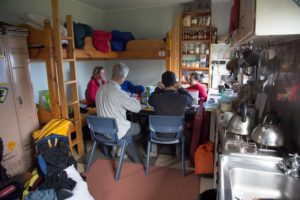 Field huts are very compact open plan buildings with cooking, work and sleeping all in the one room.

Maintaining the station requires a lot of staffing throughout the year, whereas the move to a field hut model would increase the ratio of scientists to support staff. From an efficiency perspective there may well be a reduction in the cost of conducting research without the infrastructure and associated staffing of the station. The question is how this will impact the breadth and quality of research and data from this Southern Ocean outpost.

One of the biggest losers in this change will be the Tasmanian Parks and Wildlife Service (PWS), who are the land manager. The PWS relies on the AAD to provide transport and infrastructure which allows parks rangers to have a permanent presence on the island, which is a Nature Reserve and World Heritage Area. Rangers undertake numerous monitoring programs year round and manage shore visits from tourist ships. 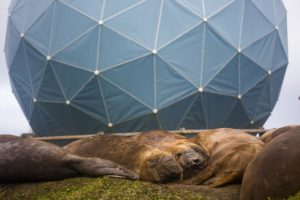 Elephant seals chilling out next to the satellite communications infrastructure at Macquarie Island station.

The current Australian Government have demonstrated a lack of support for scientific research, notably in cuts to CSIRO climate research (with serious implications), so it is perhaps not surprising that they are seeking cost savings by shutting down the Macquarie Island station, particularly to help offset the cost of the new icebreaker being commissioned for the AAD. Macquarie Island certainly does not have the geopolitical significance of Australia’s three other Antarctic stations, which even the most anti-science government would surely see fit to maintain to justify the somewhat disputable Australian Antarctic territorial claim.