Five years ago this month, hunters on Macquarie Island killed six rabbits. The hunters had been patrolling the Subantarctic tundra for a little over three months in the search for feral rabbits. At the time nobody knew these were the last rabbits, so to be sure the team of 12 hunters and dog handlers continued their search for more than two years, covering over 92,000 km on foot between them.

These six rabbits included two which had avoided the poison baits strategically dropped all over the island in the winter of 2011 and four born since the baiting. Winter is when the tens of thousands of rabbits would be hungriest. The poison baits were devastatingly successful. After baiting a team of hunters and trained dogs combed the island. They found – and dispatched – 13 rabbits, including those last six in November 2011. 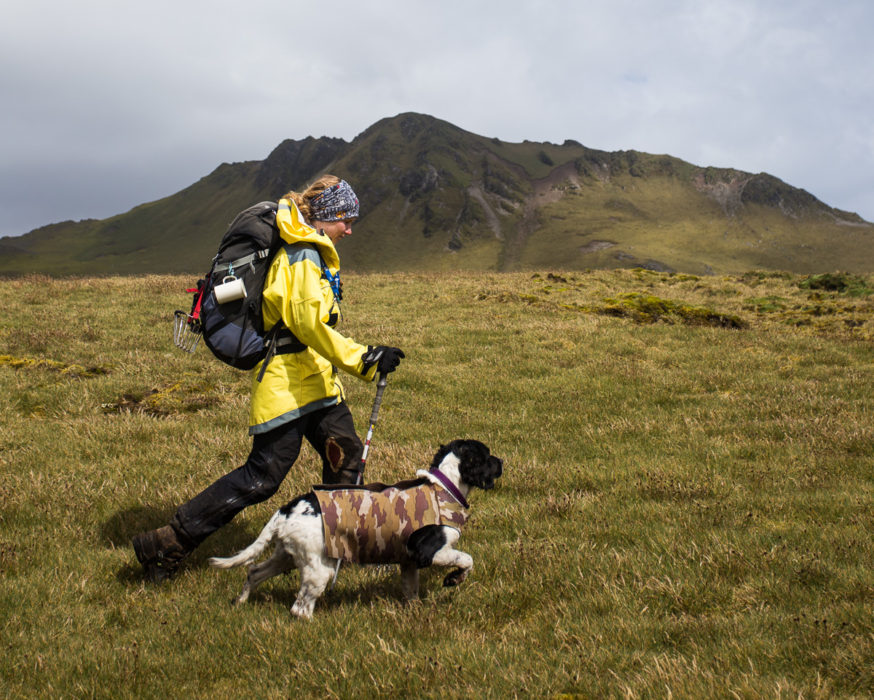 Dog handler Karen with Ash searching for signs of rabbits in 2013.

Rabbits had been on Macquarie Island for at least 130 years, having been introduced as a food source by sealers in the late 19th century. They subsequently made themselves at home on this grassy outcrop in the Southern Ocean, destroying vegetation and excavating fragile peat soils.

Natural boom and bust population cycles saw rabbits denude whole valleys and move on, like a disease on the landscape. Macquarie Island’s vegetation had never experienced herbivory other than the minuscule munching of invertebrates. Predatory skuas and feral cats had some impact but the rabbit population thrived. Biological control, firstly myxoma virus and later calicivirus, had some success in reducing rabbit numbers but was never going to eradicate the feral species.

Cats were eradicated from Macquarie Island in 2000 and there ensued many years of talk about removing the final trinity of feral mammals: rabbits, rats and mice. Similar projects had been successful on other much smaller islands, notably in New Zealand, but never on such a large scale. 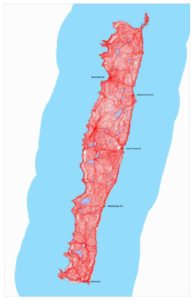 The GPS logs of the hunting team during 2013-14 show how thoroughly the island was covered on foot. Source: Macquarie Island Pest Eradication Project: Evaluation Report August 2014.

In 2007 the Tasmanian and Australian governments committed $24.6 million and the planning and preparation began. Aerial baiting in the winter of 2010 was aborted due to bad weather. The helicopters had better luck in 2011, dropping tonnes of cereal baits laced with brodifacoum in a highly coordinated exercise.

Although the baiting killed around 99.95% of the rabbits the critical part of any eradication program is the elusive final few individuals. The hunting program involved hunters and dog handlers operating solo for 4 week missions, between them covering all parts of the island. Hunters searched for any signs of rabbits in all kinds of weather, including spotlighting at night and looking for tracks in the snow. Dogs trained to sniff out rabbits (and others trained for rodents) put their noses to the task. 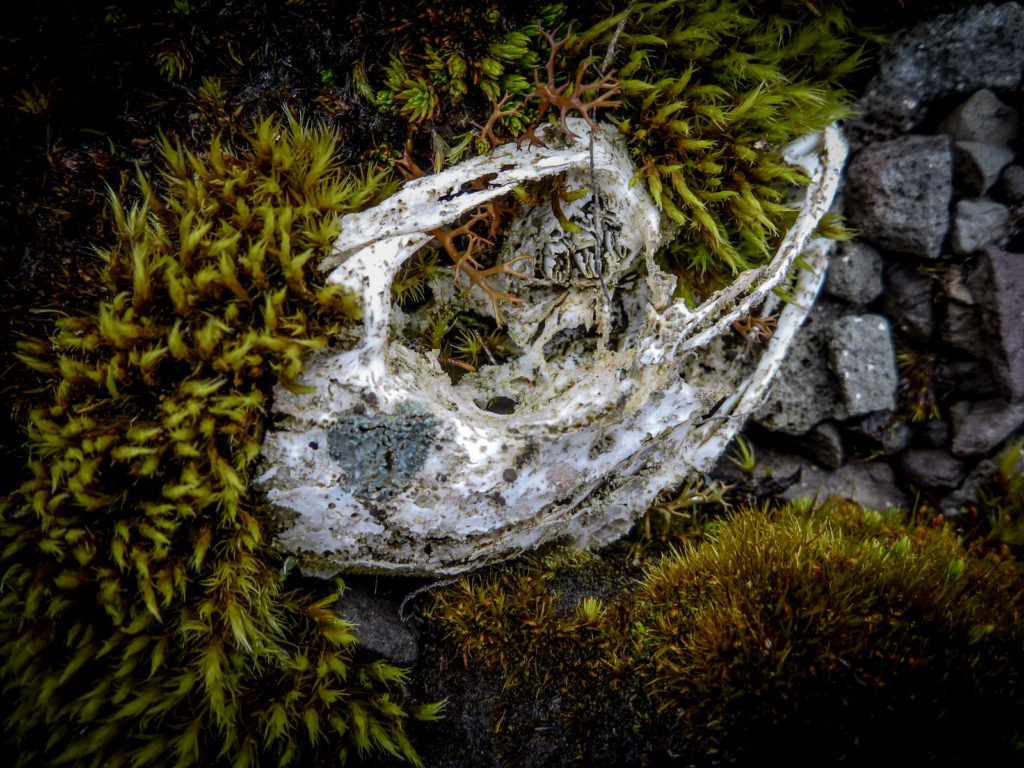 A rabbit skull in 2013 is a reminder of the now-extinct feral species which thrived on Macquarie Island.

During the two years of surveillance the hunters found off-track walking became slower as the native vegetation grew taller and denser. In April 2014 the last of the hunters and dogs departed Macquarie Island, their mission accomplished. Aside from the obvious recovery of native vegetation there has been a remarkable improvement in the status of several threatened seabird species now breeding much more successfully on Macquarie Island in the absence of rats, mice and rabbits.