Forty-five degree slopes, putrid seal wallows and gale force winds – these are some of the challenges and hazards of getting around Macquarie Island. Several walking tracks provide access between field huts and key locations on the island. To go elsewhere requires walking cross country, which is becoming slower and harder since rabbits were eradicated.

Rabbit-grazed grasslands which covered much of the island like a mown lawn are now knee high grass emerging from a thick spongy moss layer, making each step like walking on a stair climbing machine with soft foam-soled boots. Tussock grasses over one metre tall are marching across the island, their long trailing leaves creating a tripping hazard, not only off-track but also swallowing up some of the less-traveled tracks. 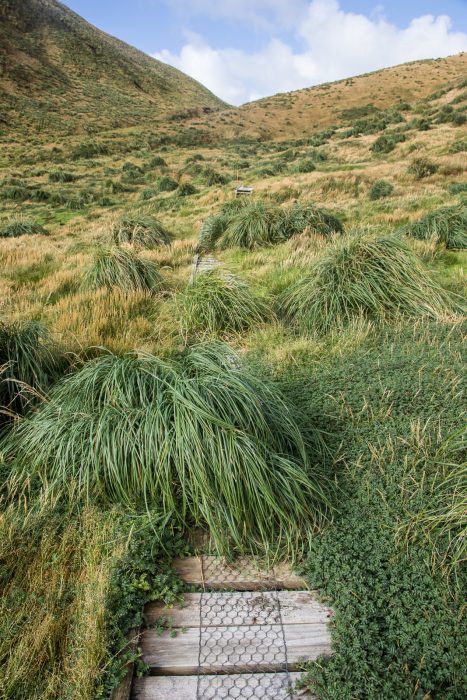 This duckboard track at Brothers Point is disappearing under the vigorous growth of tussock grass and Acaena in the five years without rabbits.

Near the coast masses of tussock grass (Poa foliosa) make walking slow and conceal seal wallows. Navigating this country involves carefully balancing on top of wobbly tussocks and probing the gaps between them for solid dry ground (making hiking poles very useful!). Elephant seals can haul their considerable bulk a surprising distance uphill and inland in search of a nice muddy wallow. The tracks formed by one ton seals are smooth and slippery like a waterslide but rather than a swimming pool they lead to a fetid morass of mud and seal excrement. In his book Feral Dilemma, Michael Anderson describes his experience of falling into wallows while out spotlighting cats at night on Macquarie Island: “Falling and knowing what is coming is a horrible thing, plunging through the green or brown skin of the wallow into stinking mud and putrid water, sometimes over your head”. 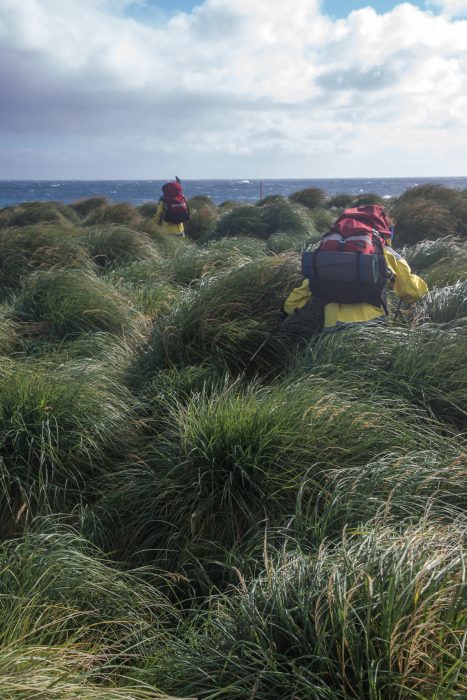 Navigating the tussock grass maze, on the lookout for stinking mud wallows. 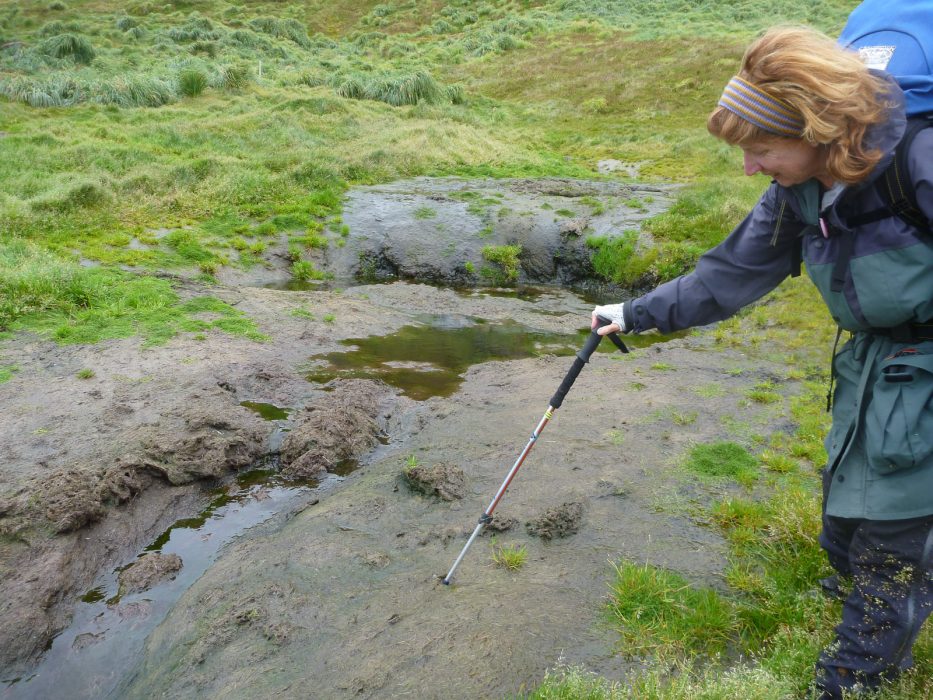 An elephant seal’s mud wallow is not a place you want to end up in.

Coastal walking on the black-sand beaches is pleasant but rare. Instead, most of the coast comprises jagged rocks exposed to dangerous seas or rocky beaches where the loose cobbles covered in stinking decomposing kelp present a special kind of challenge. The coastal terraces are flat, low-lying land with very short mossy vegetation which looks lovely to walk on. However, this ‘featherbed’ as it is known in Macquarie Island vernacular is more like a floating mat of vegetation (predominantly mosses) on fully saturated soil. Imagine walking on a massive waterbed, the ground wobbling all around with each tentative step you take. 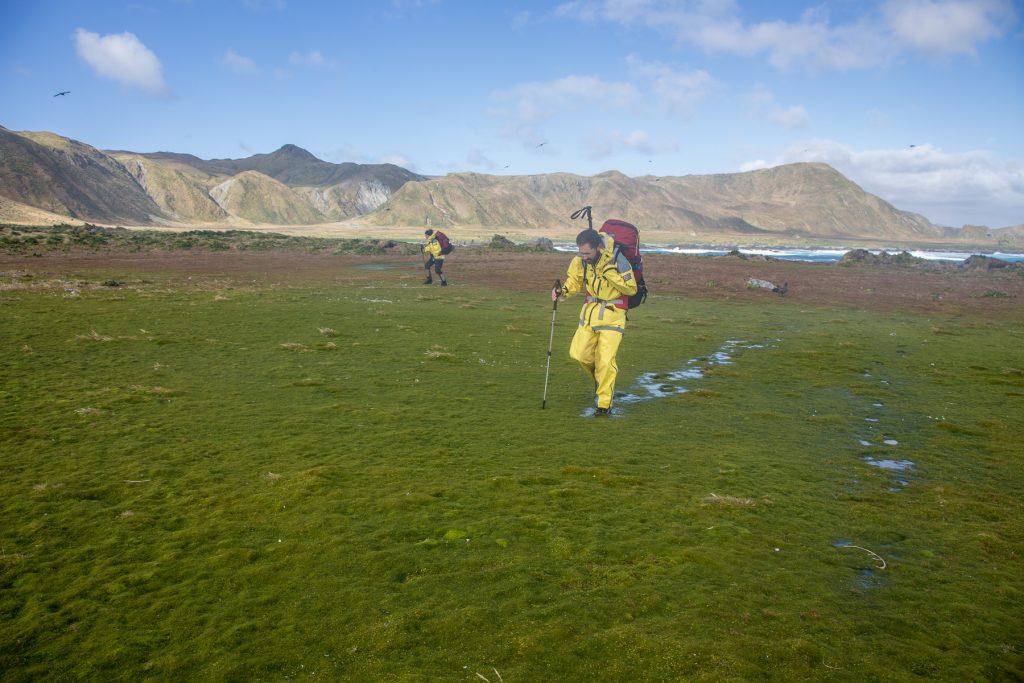 Stand still on the ‘featherbed’ mire and you will start to sink into the saturated ground.

The coastal slopes rise steeply to an escarpment almost all the way around the island, a climb sometimes requiring all four limbs. On the high plateau the relatively flat, firm ground with sparse vegetation makes walking a breeze – except the breeze is typically 60 km/hr or more. On a bad day it’s difficult to even stand up straight and the wind chill stings bare skin.

With rain or drizzle almost every day many of the tracks are constantly muddy (hence the island’s nickname ‘big green sponge’). A night in a Macca field hut would not be complete without a decorative array of steaming smelly socks arranged above the little gas heater. 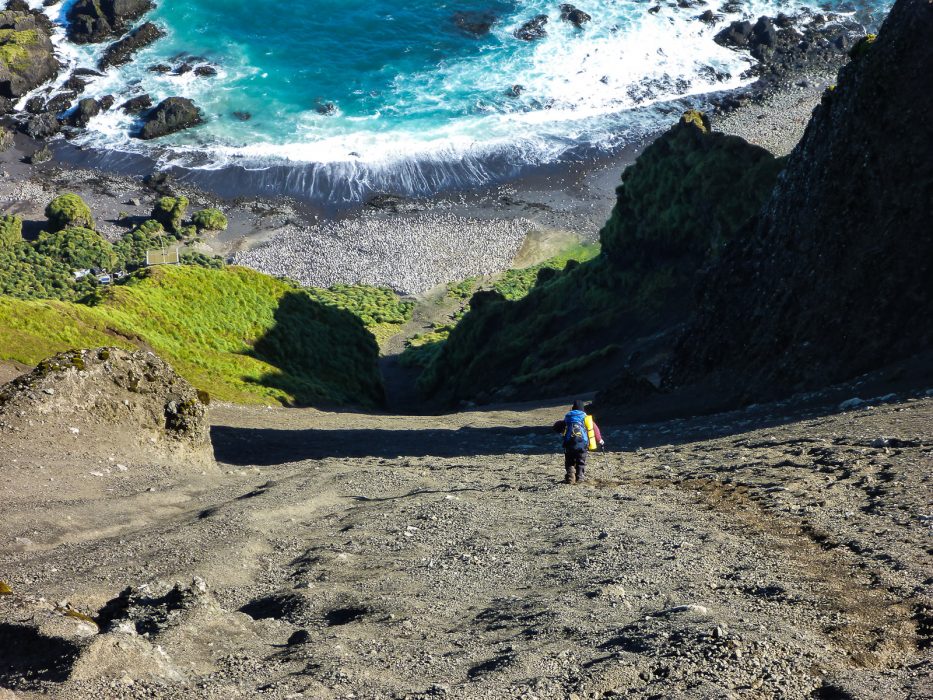 Getting to the coast sometimes means negotiating very steep slopes.