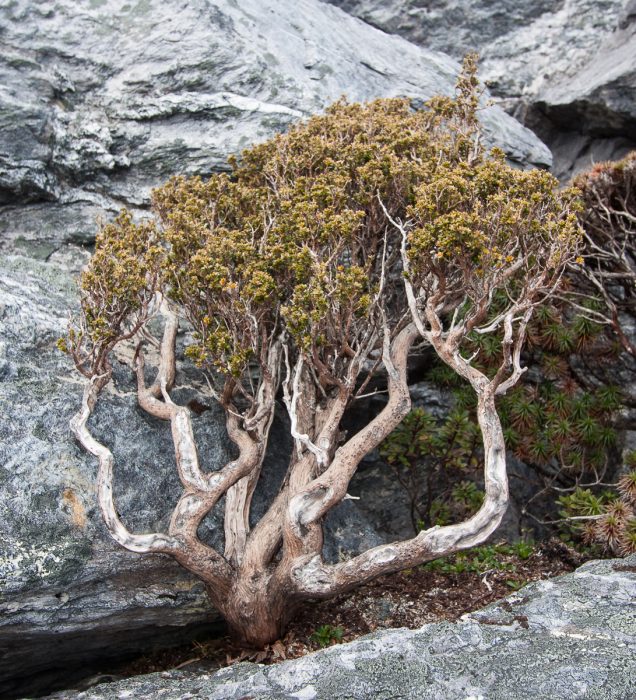 You know a location is very windy when the trees and shrubs permanently lean in one direction. They might even be one-sided, with no foliage and scarred bark on the exposed side. Obviously, they will lean away from the strongest winds… Or could there be other factors involved? Some of the windiest environments are devoid of trees or shrubs. Do non-woody plants like cushion plants and grasses also display asymmetry in response to strong winds? In a recent paper, in Arctic, Antarctic and Alpine Research, we explore these questions by looking at some of the windiest places in Tasmania and the notoriously windy Macquarie Island.

You might expect plants in windy environments such as mountain summits to grow away from the direction of the strongest wind but our recent study has shown a more complicated story. The most frequent and strongest winds in Tasmania are from the west, yet shrubs on two Tasmanian mountain summits showed a greater response to south-westerly winds while on a third summit, Mt Wellington, they were effected by north-westerlies as much as westerlies. 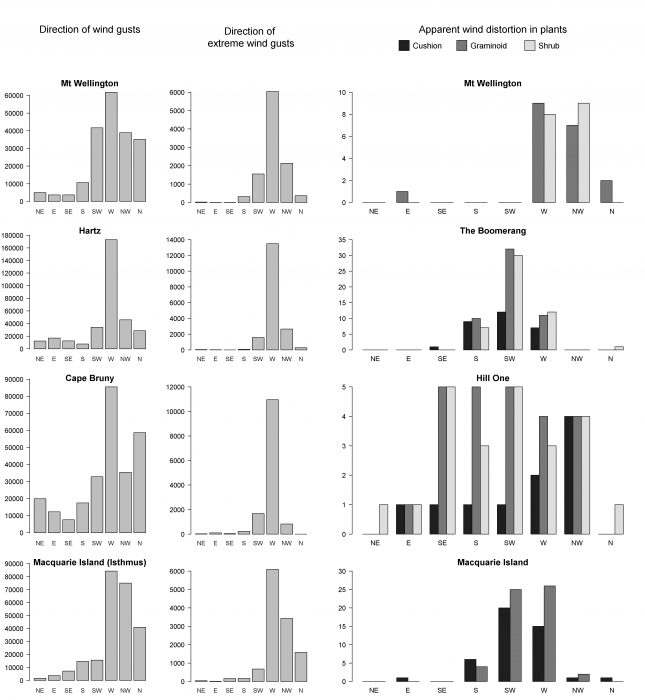 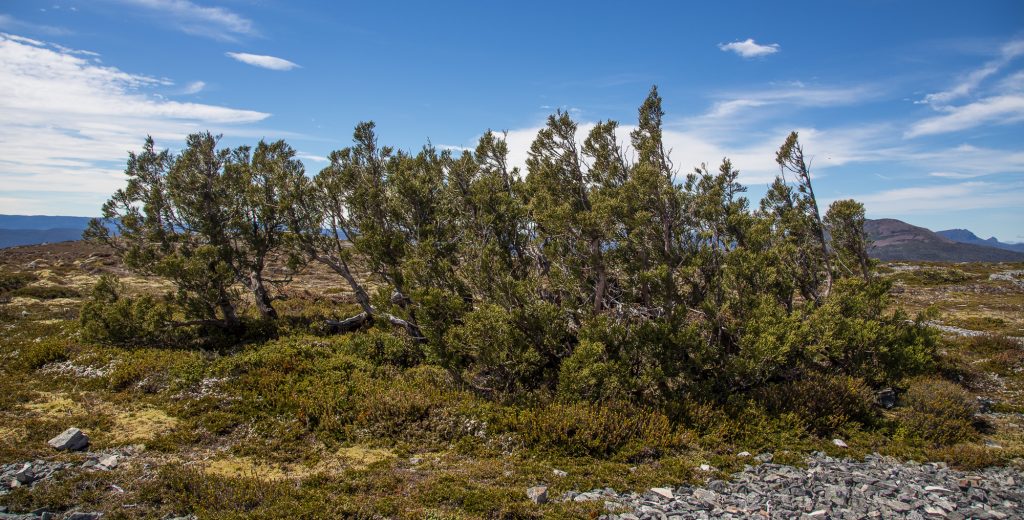 Previous studies – in a variety of locations from tropical coastlines to subalpine forests – have largely supported the premise that growth forms like ‘flagging’ in trees can be a reliable indicator of the direction and relative strength of prevailing winds. This can be useful because there are rarely weather stations in very wind exposed locations (which tend to be remote, inaccessible and subject to equipment failure due to the strong winds).

For most people, feldmark (from the Norwegian fjaeldmark) probably doesn’t rate as a well-known or familiar ecosystem but it is a good place to observe wind distorted plants. Feldmark is characterised by sparse low plant cover and an abundance of bare rock and gravel. The environment is so windy and wet that any bare soil is blown or washed away. Wind is such a dominant force in feldmark that the plants actually move downwind gradually as they grow on the most sheltered side, often declining at a similar rate on the exposed side. The landscape itself changes as frost heave, wind and water shift rocks and gravel around. 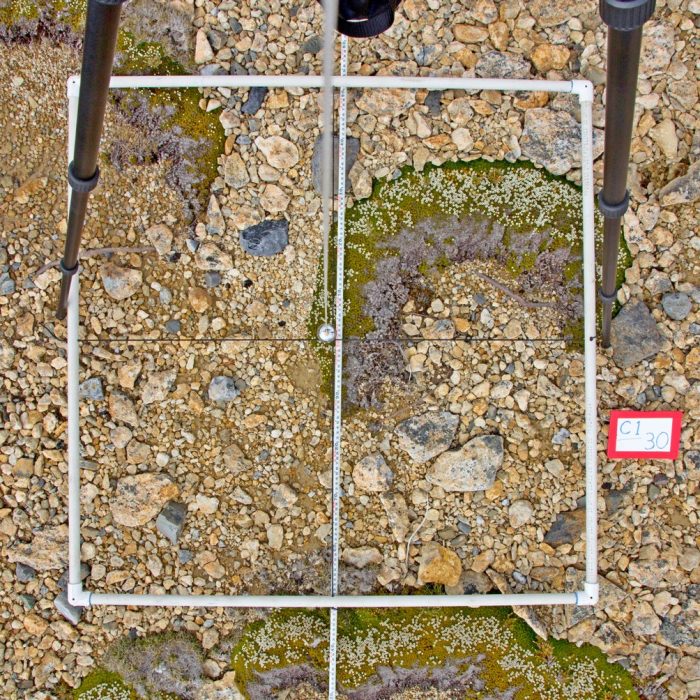 Feldmark on The Boomerang with cushion plant showing erosion on the southern side and growth on the northern side in response to southerly winds. North at top. 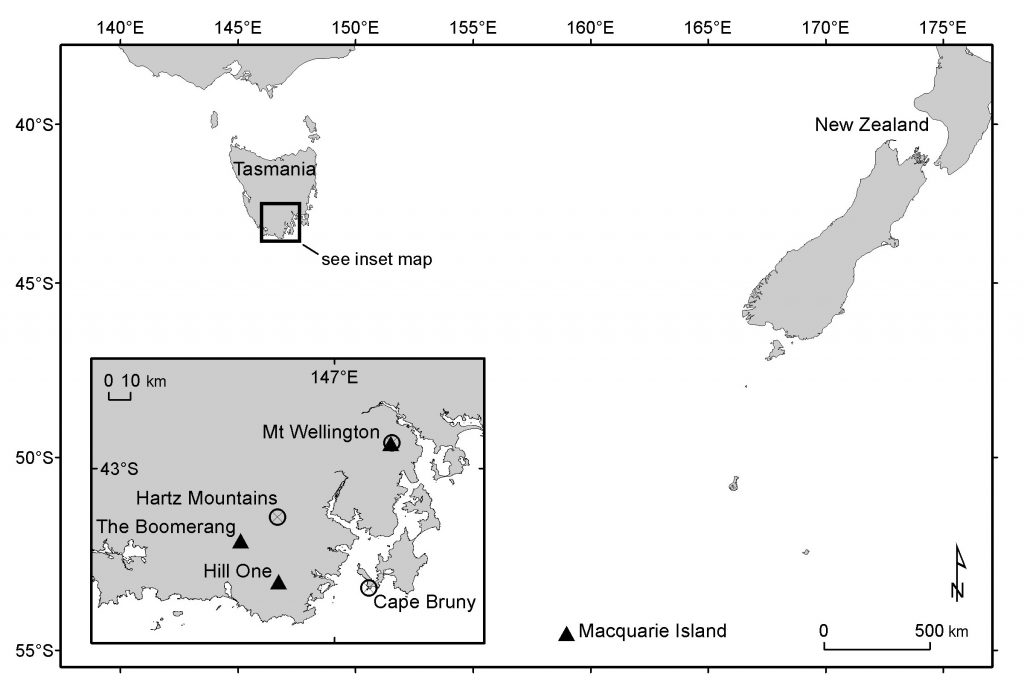 We looked at two feldmark sites in the far southern mountains of Tasmania, Hill One and The Boomerang, where prostrate shrubs grow along with graminoids (grasses and sedges such as Carpha alpina) and cushion plants. The horizontal, creeping shrubs have a distinct directional growth form. We looked at the graminoids and cushion plants to see if they too displayed some asymmetry and found that all three lifeforms, in their own way, are distorted in generally the same direction. 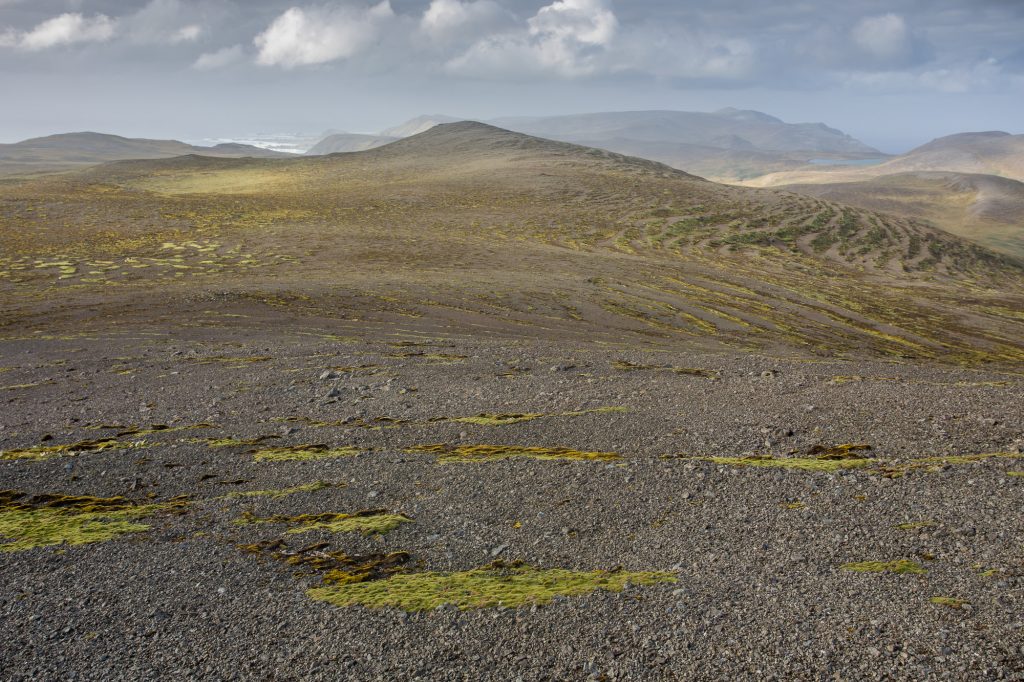 To confuse things even more, alpine plants on the summit of Mt Wellington showed a response to both north-westerly and westerly winds, but not south-westerlies. Apparently, there is more to the story than plants simply being trained by the most persistent or strongest winds. Mount Wellington has much lower rainfall than most of Tasmania’s alpine zone and is subject to warm dry north-westerly winds in the summer growing season. Alpine plants growing on an exposed rock outcrop with shallow soil could easily be subject to water stress and concomitant damaging effects of strong dry winds.

Quadrat surveyed at Mt Wellington summit. Prostrate shrubs growing toward the east, away from westerly winds. North at top.

Windblown ice, frozen snow, sand and gravel are often implicated in wind damage to alpine plants. We suspect this occurs in Tasmania and Macquarie Island with colder south-westerly winds. Snow typically comes from an intense cold front which is followed by a strong south-westerly airflow. These south-westerly winds redistribute snow from the most wind-exposed sites, such as summits, into snowpatches on the lee side of the mountain, exposing feldmark plants to windblown particles. It may be that the impact of strong winds on feldmark plants is accentuated by the lack of protective snow cover and the abundance of sand and gravel particles compared to other alpine vegetation types which are exposed to slightly less wind. Interestingly, feldmark only develops on certain rock types and does not occur on the dolerite which forms most of Tasmania’s alpine areas.

More work is needed on the physiological effects of winds on alpine plants and on the abrasive effects of wind-blown sand and ice to better understand why some plants in some situations respond to different winds.